Brady Miracle, the world’s greatest chime player, is donating all of the proceeds of his triple platinum album to the O’Keefe Music Foundation.  We simply can’t thank him enough for this historic act of philanthropy.  Be sure to check out “Chimes and Chicks”, the latest masterpiece from Brady Miracle and The Pulverizers.  Now on iTunes. 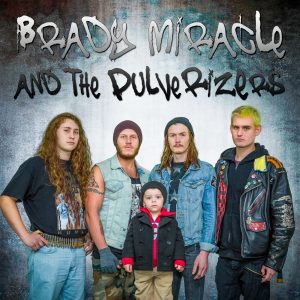 After graduating from Juilliard with a bachelor’s degree in Chime Performance, Brady continued his studies at the Boston Conservatory, eventually earning a Master’s in Chime Interpretation. He quickly conquered the world of classical music and developed a reputation as a bad boy.  Brady angered many classical musicians with his unpredictable, dangerous and impulsive behavior.  He even went so far as to challenge Lang Lang, the world famous pianist, to a duel in the thunderdome.

As quickly as Brady conquered the classical world, he left it.  This gifted artist needed a new challenge and the siren song of death metal was calling. Thus, CHIME DEATH METAL was born! Brady abandoned traditional chime techniques in favor of playing the chimes with dirty shovels, sledgehammers and impact drills. He also started singing and the world became introduced to Brady the lyricist. What at first sounded like guttural screaming over and over again, quickly became recognized as timeless poetry that rivals that of T.S. Eliot, Ezra Pound and Emily Dickinson.

In 2013 Brady guest starred in a video produced by the O’Keefe Music Foundation.  Some fans accused him of selling out.  In later interviews, Brady admitted that he was having financial difficulties at the time and was taking anything he could get.  Many fans site this OMF ad campaign as an example of how far Brady’s star had fallen:

I don't know what they put in Girl Scout thin mint cookies, but it's addictive.  In 2013 I spent most of my money on thin mints....hoarding them in refrigerators. Weeks would pass where I would eat nothing but perfectly chilled thin mints and milk.  I wasn't practicing the chimes.  I wasn't touring.  It was a dark period in my life.  But through the support of my family, I conquered my thin mint demons."

Brady’s career then experienced a resurgence as younger fans began to discover his classic songs.  “Chimes of Doom”, “Chimes:The Obliteration” and “Chimeapocalypse” have all become woven into the fabric of music history and each year teenagers discover the timeless and universal quality to Brady Miracle’s work. His exclusive interview on Channel 46 News further bolstered his career.

In 2015 the O’Keefe Music Foundation pleaded with Brady to record on their latest cover,”Sober” by Tool.  After lengthy contract negotiations it was agreed that there would be 2 versions of “Sober”–one rendition without Brady and another entitled “The Brady Miracle Super Special Sober Edition”.  One version costs a $1, the other costs $10. Why?  According to Brady (who often refers to himself in the 3rd person),

Brady is currently working on his next magnum opus entitled “Chainsaw & Chimes”.  Fans can hear an excerpt below:

Brady Miracle continues to write, record and tour the world, leading a life that is nothing short of a miracle.